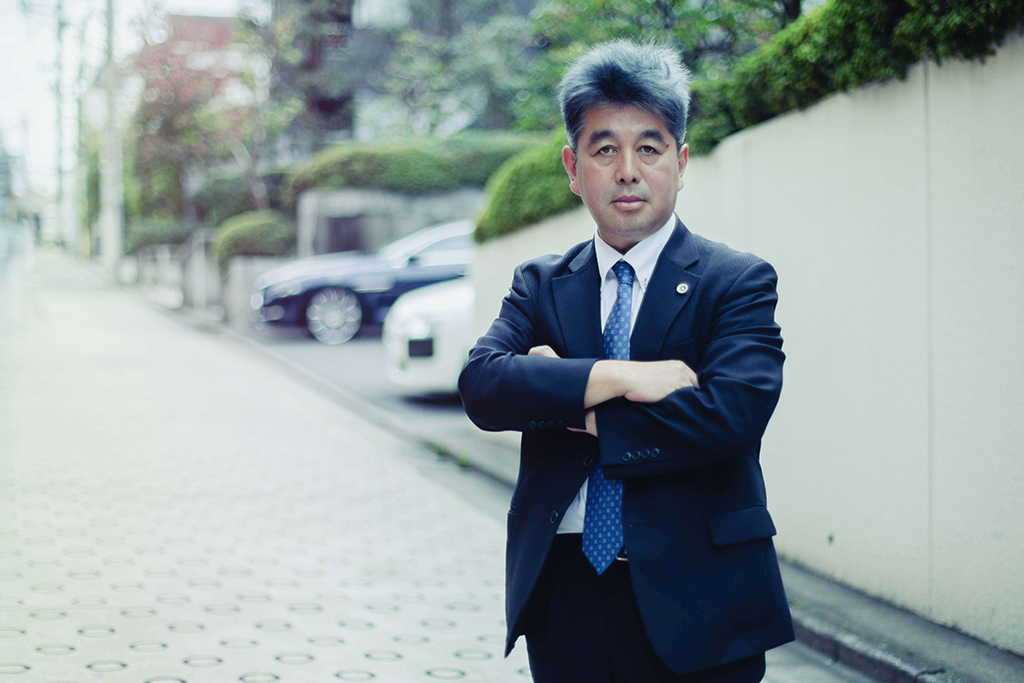 Japan’s immigration centers are cut off from the outside world.

I saw a man in a video. He was writhing in great agony on his bed. He was shouting, “I am dying!” The camera on the ceiling recorded the last eight hours of his life. He cried out for help again and again. In the end, he rolled off the bed and stopped moving. The footage also showed that no one came to help him in his last hours. He suffered all night long, alone, and died a long and very painful death.

A security camera was recording the private cell

The victim was diabetic and had frequently complained of ill health. Even after the sudden deterioration in his condition, he was denied access to medical care and treatment until his death. When his death was confirmed the following morning, his blood sugar level was found to be 6 to 9 times higher than a healthy level.

“Denying people in dire need of medical care is unacceptable in normal circumstances.” Immigration lawyer Koichi Kodama added calmly, “But to be honest, it’s common practice in Japan’s detention centers.” His story is about the immigration detention center where the deceased had been detained and his ongoing fight for justice. He came to Japan from Cameroon to seek asylum but had been held in detention without ever setting foot in this country. In September 2017, his family filed a wrongful death lawsuit against the State and the head of the detention center, and Kodama represented the plaintiffs.

The dark side of Japanese immigration—“They seem to think detainees are not humans.”

In Japan, the Immigration Services Agency can detain anyone liable to deportation, including people who entered or overstayed in the country without a visa.

Kodama says, “It is a common notion that the conditions of detention centers are worse than prisons. This is not the first case of a death in custody.”

There have already been 13 reported deaths of persons held in detention centers since 2007.

It is often said that severe human rights violations and abuses against detainees are commonplace in Japanese immigration facilities. This includes denial of access to medical care. Detainees are not allowed to go the hospital. Therefore, officers working at the detention centers have the duty of care to the detained person. This means they must maintain the lives and wellbeing of the detainees who cannot go to the hospital themselves.

The Cameroonian detainee’s family claimed that the officers didn’t report to a doctor or call an ambulance even after his condition turned worse, thus breaching the duty of care. But the Immigration Services objected that the officers took appropriate and did not violate the duty of care, as they were monitoring the victim through the camera, and took him to the hospital in the morning.

“Most of the immigration officers do not take detainees’ complaints seriously. Because they tend to think that foreigners who overstayed their visas are liars. They seem to think that detainees are not humans,” the lawyer explains.

The Immigration Services claimed that, at the time of the death of the Cameroonian national, only one visiting doctor was available between 13:00 and 17:00 on weekdays only. There are approximately 700 detainees at the center. Needless to say, it is costly to ensure the provision of adequate medical service to detainees. Most of the detainees are immigrants who illegally overstayed in Japan. So it can be tricky to determine how much we can, and should, spend time and resources to meet the needs of immigration detainees. “However,” Kodama continues, “it is true that they overstayed, but being an overstayer does not justify such inhumane treatment. Apparently, they do not deserve to be punished as such for what they have done. My view has always been that the conditions of detention centers are inappropriate, disproportionate, and unlawful.”

An unforgettable case—The reason why Kodama started to focus on immigration cases.

“There is a case that I can never forget… It was during my second year as a lawyer, just after the collapse of the “bubble” economy. Two elementary school children were taken to an immigration detention center.”

It was evident from his well-rehearsed words that he had played over what happened again and again in deep pain and regret.

“My clients were an Iranian family who fled their home country to avoid persecution. When they came to Japan, it was still in the midst of the so-called “Bubble Economy.” For a while, the authorities were turning a blind eye to those who entered with a tourist visa and overstayed to work. Because they were willing to work in low paid manual work the vast majority of Japanese wouldn’t consider doing. So, the family was living in Japan for years without any status. But one day, the farther was stopped on the street and arrested by the police.

“Then, the entire family, including two elementary school children, was given a deportation order and held in one of those Immigration Centers. The cramped cells had no air-conditioning, and you could not even look out of the window. You were not allowed to exercise. You had to use the bathroom in the cell, with only waist-high partitions—so anyone could hear and smell everything. They had to live in dreadful conditions.

“The mother said she would rather accept the deportation order than let her children to be treated in such a degrading, humiliating way. She would rather be killed than be there. So, they were allowed to come out of the detention center on a temporary basis.”

While on leave, they sought legal advice on asylum, and Kodama took their case.

“I was helping them apply for asylum so they won’t be detained again. But in the end, they were asked to present themselves to the Immigration Services and arrested.

“I felt as if all I did for them was for nothing. My mission as a lawyer is to help my clients get back the freedom that they lost. But elementary school children were taken away before my eyes. I felt frustrated and in despair. It was awful not being able to do anything to help them.”

When Kodama finished his story about the family, his voice was trembling. In the end, they were granted asylum by the United Nations and relocated to Norway.

“I have been working on immigration cases for over twenty years since then.”

What drives him to keep working for the cause—“Because we are doing the right thing.”

It is very demanding to fight cases for immigrants. Lawyers have to visit immigration centers regularly. It takes substantial time and effort, and there is no money in them. The clients are foreigners, so it is not easy to identify their family members, or in some cases, the families of the deceased. And most of all, it is nearly impossible to win.

Kodama tells us that there are only twenty to thirty lawyers in Japan who regularly work on immigration cases.

Then, what is preventing him from giving up?

Kodama recalls, “When I visited the UK’s immigration centers, I was convinced that we were doing the right thing. What is wrong with Japan is the Immigration Services and the courts that accept what is wrong as right.”

In the UK, the human rights of immigration detainees are protecred as a matter of course. Applications for immigration bail, which you need to be released from detention, are quickly processed. Unlike Japan, the Border and Immigration Inspectorate has sufficient authority and recourses to thoroughly inspect removal centers and holding facilities across the UK.

“Even in the UK, sometimes the immigration authorities may violate the human rights of detainees. Still, if this happens, the court will intervene and use its power to resolve and prevent such violations. This is the stark difference between Japan and the UK. While I was there, I talked with many people working in the filed, and it gave me the courage to continue. We must fight for a fair and humane immigration system in Japan. Otherwise, nothing will change.”

We need to think of immigrants as our friends to make a real change.

Kodama says, “Immigration issues are not a prime concern in our society.”

“In Japan’s immigration centers, vulnerable detainees are subject to cruel and inhumane treatment. But some people say it is wrong to spend taxpayer’s money on feeding illegal immigrants for six months. When you worry about your life or other problems, you don’t care about much else, let alone other people who desperately need help. We need to ensure that everyone is living comfortably to create a more socially just and conscious society.

“But that’s not enough. We need to change the way people think and interact in the world.”

Japan will continue to attract immigrants.

“Many people think they have nothing to with immigrants. But we need to make them realize that we are all human beings, and everyone deserves respect. I believe that the more foreigners there are, the more people will get used to them. They will eventually understand foreigners are no different from anyone else.”

Imagine the man from Cameroon and the Iranian children in Kodama’s story as your friends. If someone tells you that you need to take more interest in human rights, it might sound too strong, but if these things happened to your friends, you wouldn’t think twice about seeking justice and humane treatment for them.

“About ten years ago, I represented the family of a woman from Sri Lanka, who was killed in a car accident in Japan. The court of first instance awarded the family of the deceased compensation of 25 million yen. But the court of appeal reduced the amount to 5 million yen. It was perhaps because the amount rewarded was too high in comparison to the cost of living in Sri Lanka. When the matter was referred to the Supreme Court, I sought advice from a professor. “

“He said to me, ‘When society changes, so do unreasonable judicial decisions. For example, it used to be that no compensation was paid for loss of earnings if the victim was a housewife. It reflects society’s view of the value of a housewife. But this has changed following the advance of the socio-economic status of women in society. Nowadays, housewives are entitled to claim compensation even if they do not have any material source of income. I am not just talking about changes in the law. Changes occurring in society’s views and values can also influence the outcome of lawsuits. It’s not all about logic.'”

“In fact, I feel that changes are already happening in our day-to-day lives. Naturally, more people are used to foreigners. These days, it is more common to have some international classmates, especially in elementary schools.

“If everyone sees immigration issues as something that concerns their friends, public awareness about the lives of immigrants will change too. When people value empathy and compassion in society, it may change lawmakers and courts too. In that sense, I think Japan is lagging about twenty years behind other countries…”

Kodama shares his hopes for the future in twenty years.

“I will continue to work as a lawyer for another twenty years. I will continue to fight for justice in courtrooms, which I consider as my home ground. I wait for conscientious judges to make the right decisions. It takes time for sure, but I believe one day, my dream will come true.”

Interview and text by Yuko Haraguchi
Photography by Ooki Jingu

If you are a plaintiff, lawyer, or anyone who wishes to support our activities, please do not hesitate to contact us.