The time has come – challenge after a twenty-five year struggle 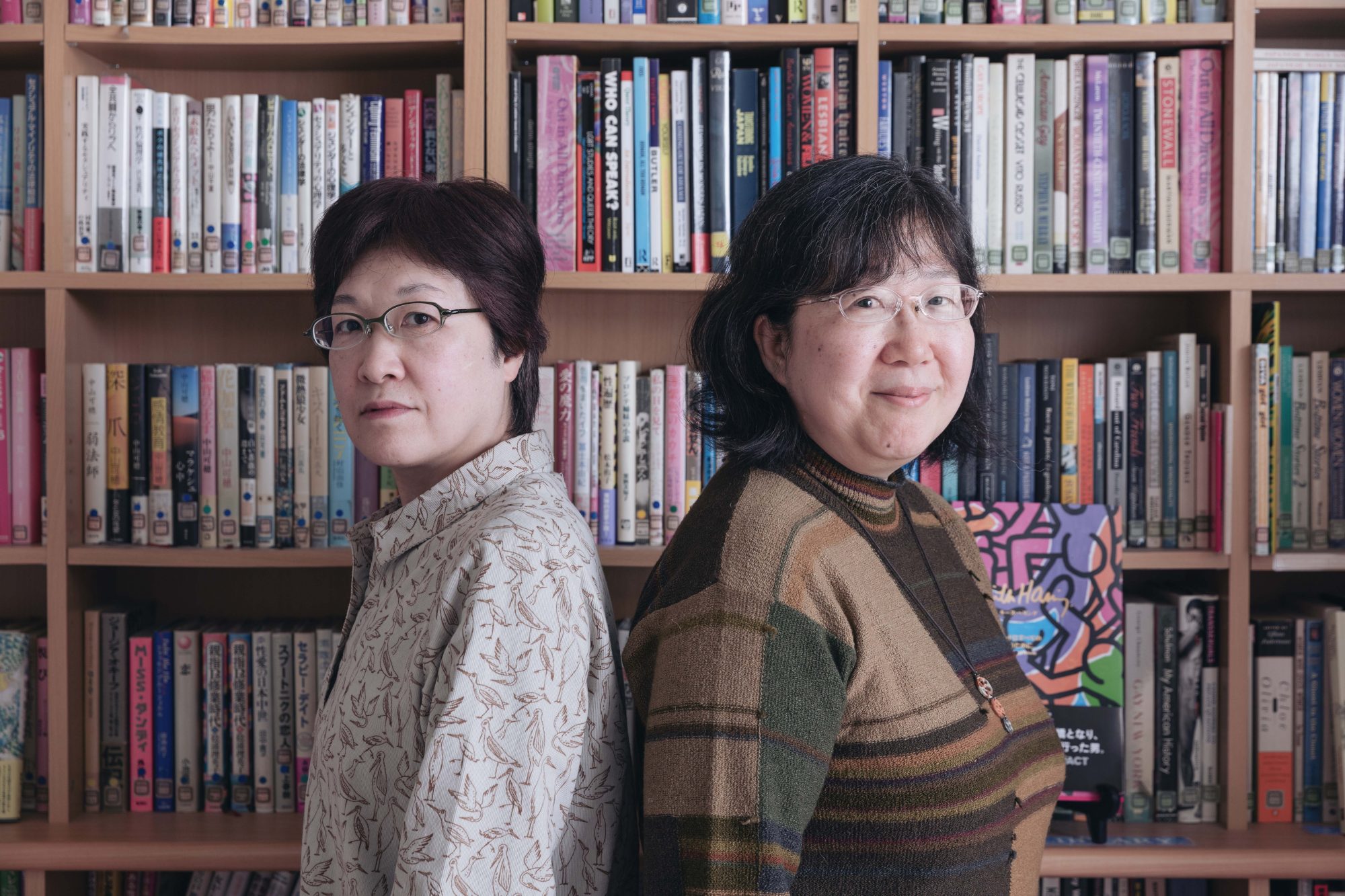 Story of a couple, Yoko and Chizuka

“When I was a teenager, my future was hopeless. Every day, I made a wish, hoping that time would pass by quickly,” Yoko Ogawa says when she reflects upon her youth.

“I thought I had a disease. I referenced an encyclopedia in search of a description of my ‘condition’, and I stumbled upon the word – ‘abnormal sexuality‘. I never thought that somebody existed like me. The only future I could imagine for myself was to grow old and die alone.“

“After a while, I met a lesbian community. They were the ones who saved me. ‘You are not alone, Yoko’ they said to me. ‘We understand you. We are your mates. We are your friends. And there are even more of us.’”

Yoko, 55 years old now, has been living for 20 or so years together with her partner Chizuka Ooe, 58. They also have a parrot who is over 20 years old, just like their love.

“We have been partners for 25 years, and living together for 20 some years” – this is how they introduce themselves. Why can’t they just say that they are the couple celebrating a silver wedding anniversary? – Because they don’t have a ‘wedding’ date to sign the license. Their partnership is not legal.

Meeting through the lesbian community, they started seeing each other 25 years ago. Since then, they have been always together. When Chizuka switched her career from a manufacturer to cable-TV provider, when Yoko switched from a seeds and seedling company; they went through the transition period together.

“Now we are working in the same office, for a counseling and support service center. Sometimes it’s hard to stay together, day and night. Occasionally we have small quarrels,” Yoko laughs as she confesses the struggles all couples share in their daily life.

For the past 25 years, they have been a two-earning couple, partly because they felt that it was the best way to acknowledge one another as equal. However, “after 25 years, we changed our way of thinking; we decided that perhaps we don’t have to be precisely equal with regard to household labor or financial support.”

Apart from their weekly jobs, they run the community for lesbians and bisexual women – LOUD (Lesbians of Undeniable Drive). “LOUD already became a critical part of our lives. More than 100,000 (total) have visited us over 20 years,” they say.

We interviewed them at LOUD. It is a comfortable place, lined with shelves of books on the wall.

Unlike Yoko, Chizuka embraced her sexual orientation from an early age. Yet she still had difficulty coming out as a lesbian to her family.

“It was in one of the family gatherings on the New Year’s Eve, about 10 years ago. Some relative started criticizing my sexual orientation, saying that I was an ‘lamed’ because I was a lesbian unable to marry.”

“I thought I was confident enough to say ‘nothing is wrong with me’ or ‘I don’t have any reason to apologise for who I am’. For over 40 years, I’ve been proud of myself. Yet at the last moment in facing my family and relatives, I found myself in justifying myself. I couldn’t stop crying. I was nervous, frustrated, and disappointed. I knew that they had no right to deny the value of my life, but they did. It was painful.”

“When I looked at my father, he clenched his fists tightly, and and he lowered his eyes with a blush. He couldn’t say a word. I was continuously crying, trying to explain my sexual orientation, wanting to come back and stay with Yoko to celebrate the coming year.”

“A few days later, I saw my father again. He said, ‘I’m sorry I couldn’t stand by you.’ – that was the point that I understood how he felt. If I myself had difficulty explaining who I am, I thought, it might be more difficult for him to explain on my behalf,” says Chizuka.

“This is just one example. Just because we are a lesbian couple, we need to undergo so many unpleasant things,” they say. “But this is what’s happening in the society. What we underwent is what the society is undergoing.”

Chizuka used to pretend to be heterosexual at work. At a certain point, she quit pretending. “Encouraged by her lesbian friends and community, I started to think, “’I want to be myself, this is me; there is nothing to hide’.”

“I really feel grateful for those who encouraged me. This is the reason why I started to be involved in the activities to support LGBTQs. I want to know what I could do in return,” she says.

For 25 years, Japan has undergone a huge social change regarding  how to become inclusive. “It has become easier to find out information. But still, many people find it difficult to live as they are,” says Yoko.

“One day, I received a call from a teenage girl. She said she wanted to die. I talked to her, using exactly the same words that someone said to me over 40 years ago, ‘I know what you feel. It feels so lonely. But bear in mind that you are not alone. We understand you. We are your mates. We are your friends. And there are even more of us. You don’t need to die.’ So she didn’t.”

Yoko and Chizuka were the first couple to registered under the partnership certificate in Nakano municipality. Because they have come out publicly, people god to them seeking their advice. But they themselves are the ones who struggle.

“A few years ago, I was sick and about to be hospitalized. Staff members at the hospital asked me if I was living with a family. I was so sick and couldn’t explain about Chizuka. In the end, I gave up staying at the hospital. That was tough. If I had partnership certificate, it would have been easier,” she reflects the pain she went through.

“Having a partnership certificate is delightful, but it’s not enough.”

Certificate at municipality doesn’t guarantee the same rights that are entitled by law. Same-sex couple can’t inherit, nor capture a tax benefit, social security, or division of property. They are offered fewer options of insurance or welfare.

Yoko and Chizuka have been a two-earning couple not just because they chose to be, but also because it was necessary for them to live a financially secure life.

“Let’s start the discussion on the family” by Chizuka

“What will happen in a time of disaster?” worries Chizuka. “We won’t be allowed to go to the same evacuation shelter, because we are not considered as one household. This shows how we are not guaranteed legal status.”

“The existing system has benefits, even though it’s not perfect,” Chizuka states.

“The marriage system has many internal problems. We are still tied to the feudalistic family system of the past. And the big problem is gender inequality. The current law differentiates women from men by marriageable age (though this will change in the future). Only women need to wait for remarriage for 100 days. As Japan doesn’t allow dual-surnames, for most couples women change their surnames. So many things remain unfair.”

“Some say, same-sex marriage is against the ‘beautiful Japanese family’. Is is completely nonsense to standardize the family. Every couple should be different.”

“Discussion on same-sex marriage will shed light on some problems within the marriage system. We can also start discussing gender inequality and dual-surname.”

“The problem is that we are not even given the options of whether we want to be married or not,” says Yoko.

On the 14th of February, the first lawsuit in Japan started, seeking the legal recognition of same-sex marriage. This case is filed against the national government, claiming that not recognizing same-sex marriage is unconstitutional. A rallying call is ‘Marriage for All’. Plaintiffs include 13 couples from Tokyo, Sapporo, Nagoya and Osaka. Yoko and Chizuka decided to join “because unless we raise our voice, nothing will change.”

“If this lawsuit had happened 25 years ago, we would probably join. But we feel that the time is just right. We are now in our 50s and this is going to be our last challenge,” says Yoko.

“I’m not sure if same-sex marriage will be legalized in our lifetime. Some says it’s not possible. But we never know what will happen. More and more people are starting to follow us. By calling for action, the team will be bigger.”

“We always felt like we needed to make an extra effort in order to be liked by others,” says Chizuka.

“We wanted to be accepted. Even now, we still want to be accepted. Yoko is involved in many local activities and goes out of her way to help others. When it snows, she shovels the paths of all the others in the neighborhood.”

“I’ve also been busy and involved in various activities supporting LGBTQs. I just wanted to slow down, spend more time with Yoko, or  invest time in my hobbies. When I decided to join this lawsuit, I thought – Ok, this is going to be my last action.”

“The only thing I want to say now is – I want to see what the court will decide. It may take some time, and we will be in a turbulent storm. Or perhaps we already are. We need to keep going. I want to observe what’s happening in this turbulent era. Hopefully something will change in our lifetime.”

“On the corner of the streets in Tokyo,” Chizuka starts to project into the future, “a boy and a girl are talking to each other.”

‘Hey I got married last month,’ a boy says. The girl reacts, ‘What a wonderful thing! Whom did you marry? To a boy or a girl?’”

‘A boy! By the way, did you know this – not too long ago, same-sex marriage was forbidden in Japan!’ says the boy.

If you are a plaintiff, lawyer, or anyone who wishes to support our activities, please do not hesitate to contact us.